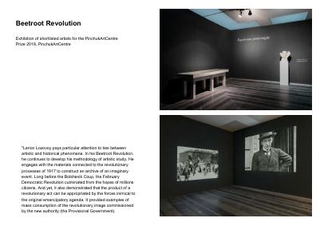 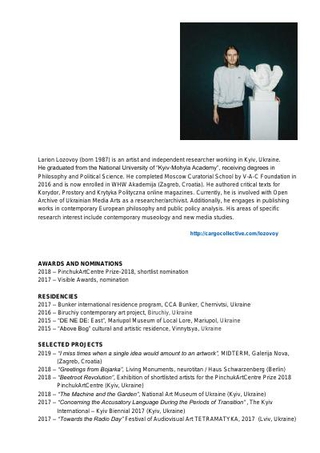 Research proposal of Larion Lozovoy for the Viafarini residency application within EXTER program:

The main reason to seek participation in this residency is that historical context of Milan post-industrial metropolitan area and institutional focus of Viafarini both strongly resonate with my recent practice. I am particularly attracted to the history of Milano-Bovisa area, wherein the shift from industrial to knowledge economy is especially pronounced. There, new campuses of Politecnico di Milano played a key role in reshaping the area that was hit by the rapid de industrialization in the 1980s. The tendency towards the cultural reuse of industrial facilities culminated in their transformation into numerous coworking hubs, openly available for creative industry professionals. It is often described in distinctly spatial terms, with incubation being expected to happen as a result of many creative individuals occupying premises of what is often a former factory. This arrangement is best illustrated by the VIR coworking space itself, located in Fabbrica del Vapore. In a number of my recent projects, I tried access the position of artist in the dominant mode of economic production, choosing dilapidated and repurposed industrial areas as a locus of research. For instance, I dealt with the history of transformation of a radio equipment factory in Ukraine into a coworking hub, with subsequent change of its acoustic regimes. This line of research continued in the city of Turin, in premises of former Fiat factory at Lingotto. Having developed a strong interest in the industrial history of northern Italy, I wish to expand it during the Viafarini residency.

I would like to spend a month of extensive research of Milan post-industrial areas, gathering case studies of “cultural reuse” of former factory facilities (besides Fabbrica del Vapore, notable organizations are Fondazione Arnaldo Pomodoro, Lambretto Art Project and Assab One). Additionally, field recordings can be gathered, along with interviews of creative professionals and local tenants who share this post-industrial context. Selected material can contribute to a didactic mixed-media installation to be worked upon during the later weeks of the residency, and shared as a work-in-progress according to VIR’s Open studios format. Public program can be supplemented with an artist talk at the beginning of the residency, and a concluding lecture offering comparative perspectives on de-industrialization and creative economies in Italy and Ukraine. I am curious how ideas similar to mine are taking shape in Italy and intend to share my humble expertise with artists, researchers and curators at Viafarini, along with general public. Hopefully, this will generate a mutual interest across art scenes and further expand the geographical profile of Viafarini. In general, I feel that Viafarini’s strong emphasis on supporting research-oriented practices perfectly matches my current aspirations. Hopefully, this well-timed opportunity will create a strong momentum in my practice and help me gather additional insight as to which potential an artist may have in discursive modes of cultural production.